Initiative For The Center

Homepage / About Us / Initiative For The Center

Historically, mathematics has provided the foundations for a significant number of great scientific advances. From early discoveries of the laws of geometry to contemporary theories of new materials and the nature of the universe, mathematics has supplied the tools and concepts that underpin these achievements. In addition, the fields of computer science, statistics, and physics lie at the heart of the convergence between pure mathematics and applied science. Recent mathematic developments in the geometric analysis have had a major impact on the foundations of gravitation theory. New computing power and algorithms have led to advances in pure and applied mathematics and theoretical physics. This includes simulations of dynamical systems, fluid mechanics, analytic and probabilistic models, and the use of computations in geometry, number theory, and group theory. New methods in stochastic analysis, random matrices, and combinatorics have ushered in a new era where deep theoretic understanding may lead to practical advances in the analysis of large data and networks. This widespread reliance on mathematical methods and insights is evidence of mathematics’ central and essential relationship to scientific achievement both in the past and in the future.

This initiative aims to establish a research center at Harvard in the Faculty of Arts and Sciences (FAS) that focuses on both research in mathematics and its applications and serves as a fusion point for mathematics, statistics, physics, and other sciences.

As a leader in mathematical research, Harvard University is home to many top-ranking faculty. Traditionally, the department faculty members have predominantly focused on research in pure mathematics. However, there are many faculty members who also work on applied mathematics, or use large computing power in their own work, including Martin Nowak, Clifford Taubes, Horng-Tzer Yau, and Shing-Tung Yau. While the Mathematics Department occasionally conducts joint seminars with the Harvard physics, statistics, and applied mathematics departments (e.g., with Andrew Strominger, Cumrun Vafa, Xiao-Li Meng, Jun Liu, and Michael Brenner), it has become clear that these fields need further integration and more regular and fluid communication between researchers. As recent advances in pure and applied mathematics continue to demonstrate, these fields are increasingly dependent on each other. For example, the advances made in string theory over the past several decades have used many tools from mathematics, and at the same time, have introduced new concepts and ideas back into mathematics and geometry. Likewise, new developments in areas, such as data analysis of large populations and three-dimensional imaging, will require a heavy reliance on mathematical studies. Future advances in mathematics and the sciences will benefit from a closer working relationship between the pure and applied sides.

Although the Center’s research topics will not be pre-selected, possible topics in mathematical applications include large data analysis, three-dimensional imaging, and gravitation theory. On the theoretical side, the topics envisioned include mathematical analysis, conformal geometry, probability theory, and mathematical aspects of quantum and statistical physics. 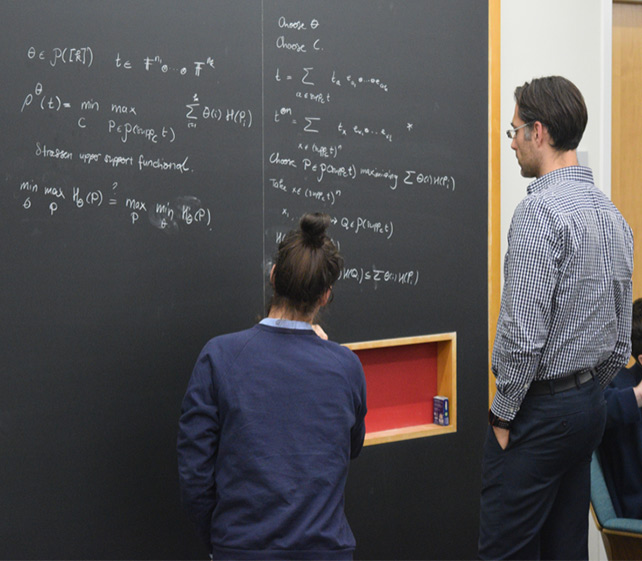