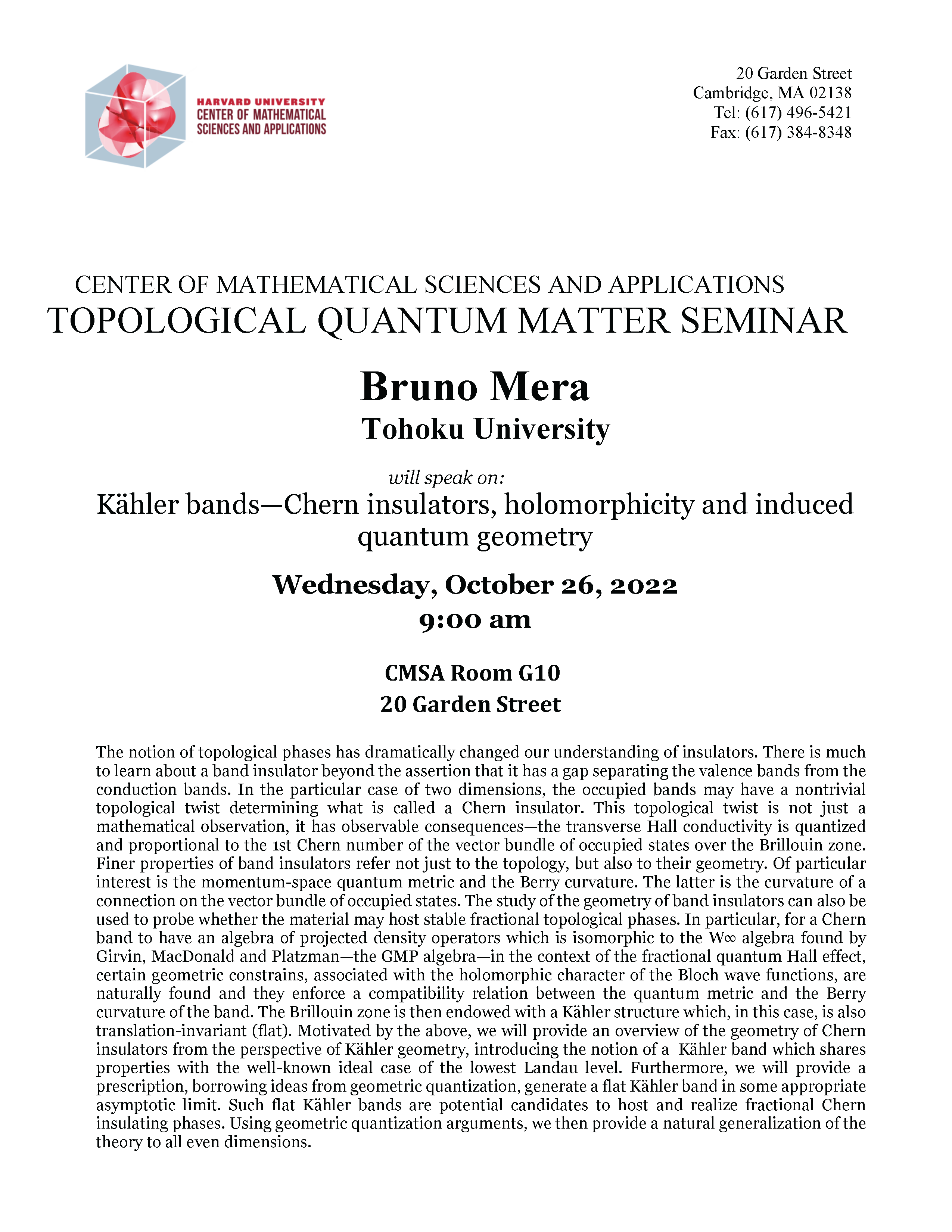 Speaker: Bruno Mera, Tohoku University
Title: Kähler bands—Chern insulators, holomorphicity and induced quantum geometry
Abstract: The notion of topological phases has dramatically changed our understanding of insulators. There is much to learn about a band insulator beyond the assertion that it has a gap separating the valence bands from the conduction bands. In the particular case of two dimensions, the occupied bands may have a nontrivial topological twist determining what is called a Chern insulator. This topological twist is not just a mathematical observation, it has observable consequences—the transverse Hall conductivity is quantized and proportional to the 1st Chern number of the vector bundle of occupied states over the Brillouin zone. Finer properties of band insulators refer not just to the topology, but also to their geometry. Of particular interest is the momentum-space quantum metric and the Berry curvature. The latter is the curvature of a connection on the vector bundle of occupied states. The study of the geometry of band insulators can also be used to probe whether the material may host stable fractional topological phases. In particular, for a Chern band to have an algebra of projected density operators which is isomorphic to the W∞ algebra found by Girvin, MacDonald and Platzman—the GMP algebra—in the context of the fractional quantum Hall effect, certain geometric constraints, associated with the holomorphic character of the Bloch wave functions, are naturally found and they enforce a compatibility relation between the quantum metric and the Berry curvature of the band. The Brillouin zone is then endowed with a Kähler structure which, in this case, is also translation-invariant (flat). Motivated by the above, we will provide an overview of the geometry of Chern insulators from the perspective of Kähler geometry, introducing the notion of a Kähler band which shares properties with the well-known ideal case of the lowest Landau level. Furthermore, we will provide a prescription, borrowing ideas from geometric quantization, to generate a flat Kähler band in some appropriate asymptotic limit. Such flat Kähler bands are potential candidates to host and realize fractional Chern insulating phases. Using geometric quantization arguments, we then provide a natural generalization of the theory to all even dimensions.
References:
[1] Tomoki Ozawa and Bruno Mera. Relations between topology and the quantum metric for Chern insulators. Phys. Rev. B, 104:045103, Jul 2021.
[2] Bruno Mera and Tomoki Ozawa. Kähler geometry and Chern insulators: Relations between topology and the quantum metric. Phys. Rev. B, 104:045104, Jul 2021.
[3] Bruno Mera and Tomoki Ozawa. Engineering geometrically flat Chern bands with Fubini-Study  Kähler structure. Phys. Rev. B, 104:115160, Sep 2021.